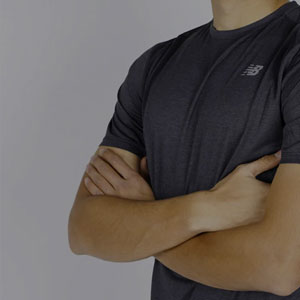 Training apparel that promises to keep you comfortable as you achieve your best workout.

Choose to overcome your limits with the New Sports & lifestyle Collections of New Balance. Clothes, Shoes & Accessories for Men, Women & Kids’ at Unique Prices & Offers. Find the perfect design and size for you at Cosmos Sport, the No1 Online Shop, with the possibility of Free Returns.

The History of New Balance

New Balance was founded in 1906 as the New Balance Arch Support Company by British William J. Riley. Until the 1950s, athletes were asking for custom made designs, signed by New Balance. In 1960, the first running shoe became known as the "Trackster", which has left its mark to this day.

Then, in 1972, the Greek-American Jim Davis, known as one of the largest manufacturers of sports shoes in the world, chose to buy the company on the day of the Boston Marathon. Four years later, New Balance made a outbrake and became famous globally. About 320 shoe designs ranked 1st in each New Release Running Magazine, winning multiple awards. On the one hand, Jim focused on developing both the service and the quality of the shoes themselves. Anne's wife, six years later, began developing New Balance culture, creating a pleasant atmosphere for both employees and the public.

It was not long before it entered the "list" of Top Brands Sports Shoes, as in the early '80s, both sales and product line-up began to have even more technology and first-class materials. The audience became more and more loyal to New Balance, as a result of which she expanded their plans. In 2015, the company signed a contract with the Liverpool football team. This led the company to an even higher position in the sportswear chart, signing many partnerships with both athletes and lifestyle influencers.

The combination of excellent quality and technology that characterizes each collection separately, as well as the fashion in each design, takes the performance of each athlete to the next-level. New Balance clothes, shoes and accessories mark every workout as well as tournament, reminding the whole audience who you really are.